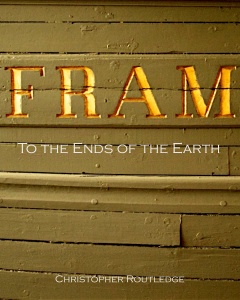 The story of Roald Amundsen’s successful 1911 South Pole expedition, and his famous rivalry with the ill-fated British explorer Captain Robert Scott, has been told many times. Less familiar, outside Norway, is the story of his ship, Fram, which, in the course of three voyages, sailed further north, and further south than any ship had ever been before. In all, the little ship spent seven winters gripped by ice near the North Pole, and twice circumnavigated the globe. To commemorate the centenary of Amundsen reaching the South Pole, this illustrated essay tells the story of the Fram and her three polar voyages.

The essay is accompanied with black and white expedition photographs taken ‘at the ends of the earth’ and high resolution colour images of the Fram as it is now, at the dedicated Fram Museum near Oslo.

The book can be purchased from here, but is also available as a free ebook.

Fram: To the Ends of the Earth Download the free PDF.

“Finally Fram showed herself in all her glory as the best sea-boat in the world. It was extraordinary to watch how she behaved. … Can anyone be surprised if one gets fond of such a ship?” –Captain Nilsen

One thought on “Fram: To the Ends of the Earth”

This site uses Akismet to reduce spam. Learn how your comment data is processed.