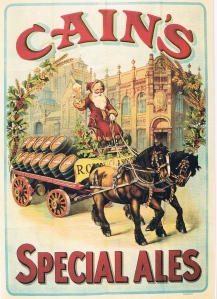 There seem to be three main, and sometimes overlapping, trends in the self-image of British brewers: the traditional, the modern, and the ill-advised. Of these, the older brewers usually go for the first. They like to be seen as brewers of traditional ales, and it helps to let everyone know just how long they have been doing it. Some examples are brewers such as Young’s (1831), Fuller’s (1845), and Daniel Thwaites (1807), but there are many others keen to make the point that they have been around for a very long time. Shepherd Neame proudly declares itself Britain’s oldest brewer, trumping them all with the date “1698”, but hinting that brewing has been going on in their home town of Faversham much longer than that. Who would have thought it?

Cain’s, Liverpool’s biggest, and of late most controversial, brewer has the phrase “Established 1850” positioned prominently on its branding. That was the year that founder Robert Cain bought his first brewery, in Limekiln Lane; he bought the current brewery, on the other side of the city, as a going concern in 1858. When I was writing my book about Robert Cain and his brewery the question of how old the brewery is came up a lot, and I was unable to find a definitive answer. So I was only mildly surprised to hear yesterday from Sudarghara Dusanj from Cain’s, asking if I could tell him definitively how long there had been a brewery on the current site. Here’s what I wrote in my book:

“Cain bought the Stanhope Street brewery from George Hindley, the vicar of St. George’s Church, Everton. George and Robert Hindley had inherited the brewery from their father. After his father’s death Robert Hindley had tried and failed to make the brewery a success and was followed by Messrs. Hyde and Rust, brewers, who rented the premises but lasted only a few months before they were forced out of business. Soon after acquiring the brewery Cain set about modernizing and improving his investment:

“During the first two years of Mr. Cain’s occupancy all the old brewing utensils and machinery were taken out and replaced with the most modern appliances. The place was thus carried on for some years when further increase of business necessitated an extension. This was effected by purchasing some of the adjoining property called ‘Cotter’s Terrace’ and throwing it into the brewery. An old building, containing offices and a warehouse, which originally stood in the yard was removed, and a new building, fronting Stanhope-street, was erected in its place. From the earliest time in Stanhope-street till the present moment Mr. Cain has been adding to and improving his brewing plant and machinery, and everything new which comes out and which is better than older machinery he buys without hesitation.”(Liverpool Review, September 17, 1887)

Cain’s willingness to keep up with developments and his commitment to relentless expansion and ‘improvement’ made the brewery a success where others floundered.  The brewery itself had been bought by ‘old Mr. Hindley’ as a going concern 72 years earlier in 1786 so its long-term viability was not in doubt. But knowing its recent history of failure, Cain must have been very confident in his own ability to make it work. He was certainly helped by Liverpool’s own growing success story.”

That was the best I could do at the time, concluding that there had been a brewery on the Stanhope Street site since at least 1786, which is actually quite impressive. But after my conversation yesterday, the following snippet jumped out at me from something I was reading for my book on William Scoresby. This is from James Picton’s Memorials of Liverpool, published in 1873:

Returning to St. James’s Church, I will now ask the courteous reader to accompany me in a walk along the Old Park Road. This road, with Smithdown Lane, Lodge Lane, and the eastern part of Ullet Lane, down to 1775 were the only roads in the township. The house and outbuildings at the corner of Stanhope Street — now greatly metamorphosed — were built in 1775, about the time when Harrington was planned out. They were long the residence of Lord Sefton’s land-agent. In 1803 three houses had been built on the west side, near the corner of Mill Street, With this exception, and one or two shortly to be mentioned, no houses existed in the entire length of the road.

Swire’s Map of Liverpool, based on a survey made in 1823 and 1824, shows the area looking like this (click for a large version in another tab):

I’ve outlined in yellow the area referred to above as “Harrington” which, before the street layout was settled in 1775, was open fields and parkland, belonging to Lord Sefton. Until 1775 it was even beyond the limits of the town of Liverpool, which at that time reached only as far as Parliament Street, the borough boundary (marked by my vertical yellow line). I have also indicated on the map the site of Cain’s brewery, on Stanhope Street, and from this we can conclude that brewing on the site began some time between 1775 and 1786, but certainly no earlier than that. It makes it one of the oldest brewing sites in (more or less) continuous use in Britain, but the marketing department at Shepherd Neame can relax.

Read more about Cains: The Story of Liverpool in a Pint, listen to me reading from Chapter 1, or buy the book here.