These images were taken at the Hull Maritime Museum. Most of them are apparently the skeleton of a North Atlantic Right Whale, but there are two exceptions: an Orca or Killer Whale, suspended in chains, and the lower jawbone of a Sperm Whale washed up on the Holderness coast and later displayed at Burton Constable. This whale is mentioned by Melville in Moby Dick (1851):

“…at a place in Yorkshire, England, Burton Constable by name, a certain Sir Clifford Constable has in his possession the skeleton of a Sperm Whale…Sir Clifford’s whale has been articulated throughout; so that like a great chest of drawers, you can open and shut him, in all his long cavities – spread out his ribs like a gigantic fan – and swing all day upon his lower jaw. Locks are to be put upon some of his trap doors and shutters; and a footman will show round future visitors with a bunch of keys at his side. Sir Clifford thinks of charging twopence for a peep at the whispering gallery in the spinal column; threepence to hear the echo in the hollow of his cerebellum; and sixpence for the unrivalled view from his forehead.” 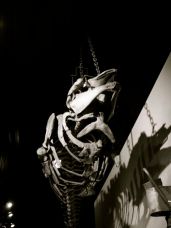 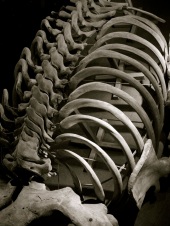 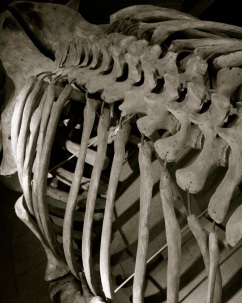 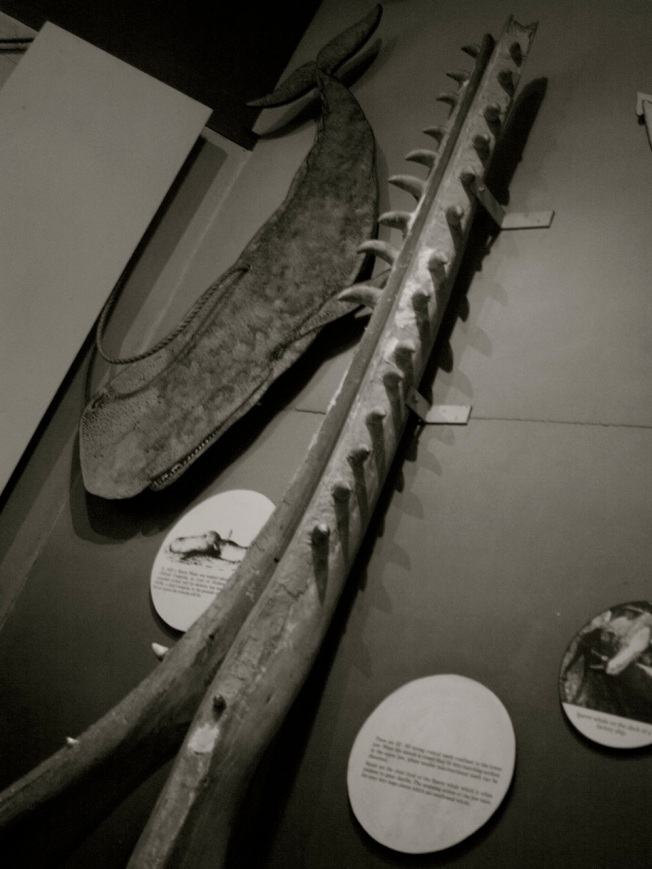 The island of Coll is roughly fifty miles from the Scottish mainland, hidden from view by Mull. This whalebone arch, looking a bit sorry for itself, is what greets you at the pier when you step off the ferry. It comes apparently from a washed up Fin whale and it looks like it was quite a big one. There used to be a lot more of these things around. I remember as a child coming across one in a park in Hull. I have forgotten everything else about that day: where it was, who I was with, or what I was doing there. Even when you just came off a ferry that swallows 40-tonne trucks whole, they seem strange and wondrously large:

Let us now with whatever levers and steam-engines we have at hand, cant over the sperm whale’s head, that it might lie bottom up; then, ascending by a ladder to the summit, peep down into the mouth; and were it not that the body is now completely separated from it, with a lantern we might descend into the great Kentucky Mammoth Cave of his stomach.

This week Melvyn Bragg’s excellent In Our Time radio programme has as its subject ‘The Whale’, a favourite topic of mine. The enthusiastic discussion between Steve Jones, Eleanor Weston and Bill Amos on the evolution of the whale made my train journey this morning a lot more pleasant and interesting. The programme is available on the BBC’s ‘Listen Again’ service until the end of the current series, and is downloadable as a podcast. Get it while you can:

Of all the whales in literature, among the most famous is Moby Dick described by Herman Melville:

“Moby Dick moved on, still withholding from sight the full terrors of his submerged trunk, entirely hiding the wrenched hideousness of his jaw. But soon the fore part of him slowly rose from the water; and warningly waving his bannered flukes in the air, the grand god revealed himself, sounded and went out of sight”.

Melville’s story is one of drama and grim portent, but far more extraordinary is the story of the whale itself. For the manner in which the whale has evolved is among the finest exemplars of the changes evolution can bring to bear upon life on Earth.

In Our Time ‘The Whale’

There is a great story over at Wired about the whaling ship Essex, which in 1820 was rammed and sunk by a Sperm Whale somewhere in the Pacific. This is the story that partly inspired Melville to write Moby Dick a book everyone should read at least once. Melville of course was a seaman on several whale ships and stories like this would have circulated among his fellow crewmembers. One of the best things about Moby Dick is the way Melville blends the mechanics and science of whaling and whales with their mythic power. The real story of the Essex is fantastical in itself, but Melville’s novel turns the whale into a force beyond nature. From the article:

The ship’s three remaining whaleboats — one had been destroyed by a whale’s flukes during an earlier hunt — were dispatched for the kill. As the harpooning began, First Mate Owen Chase, commanding one of the whaleboats, looked back and saw a large sperm whale, which he estimated at 85 feet, approaching the Essex.

As he watched helplessly, the whale propelled itself into the ship with great force. Some crewmen on board were knocked off their feet by the collision, and Chase watched in disbelief as the whale drew back and rammed the ship again. This time the Essex was holed below the waterline, and doomed.

The crew organized what provisions they could and two days later abandoned ship aboard the three whaleboats. Twenty men left the Essex. Eight would ultimately survive the harrowing ordeal that played out over the next three months.

Here’s the link to the story, which comes with an excellent slideshow entitled ‘The Creatures That Ate Hollywood’.

Here’s my take on Melville’s novel.

As every four year-old knows, up there in the loft space, in the dark underneath the tiles, hiding in the shadows, are monsters. Monsters you couldn’t imagine in a lifetime of bad dreams. Monsters just waiting to come down into the light and terrorize your daydreams as well.

I have only a vague idea where this one came from–I think it hitched a ride on a removal van some time–and I didn’t know it was up there. It’s an Imperial “The Good Companion” Model T and has seen some action since it was built in Leicester, probably some time in the 1930s. It doesn’t work, I’m afraid; the carriage return is busted. But it has very nice round keys with inlaid lettering. 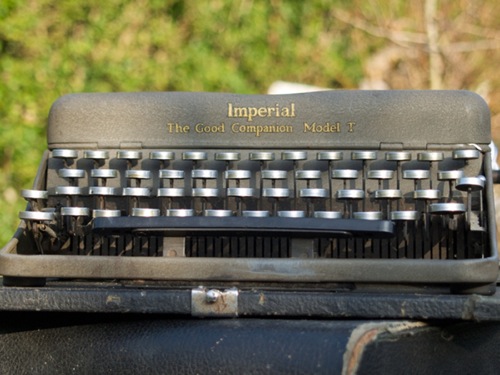 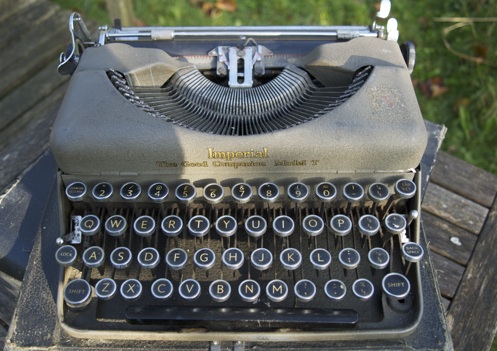