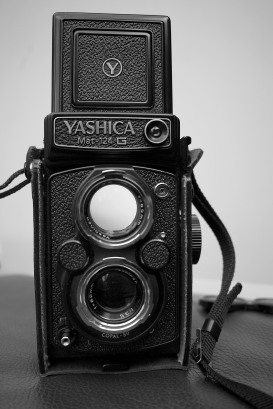 It’s been a couple of years now since I started using film cameras again and I have become quite attached to two of them in particular. I’ve written about the Zorki 4 rangefinder here before and if anything I’m more impressed with that now than I was back then, in the excitement of shooting my first roll of film in a decade. The Zorki–and its Jupiter 8 lens–is a great carry around camera that works really well in the street, but for a slower style of photography I’ve taken to using a Yashica Mat 124G. This is a black brick-shaped hunk of metal from the early 1980s which produces square negatives on medium format 120 film and makes images with fine detail and beautiful, smooth, out of focus areas.

Where the Zorki is a crude but effective tool, the Yashica Mat is a precise and delicate instrument. That’s not to say it isn’t robust–this one is over 30 years old and works perfectly–but if I was looking for a bludgeon to whack a burglar and still be able to take pictures of the crime scene afterwards, I’d pick the Zorki. The 124G is what is known as a “Twin Lens Reflex” or “TLR” camera, because it has two lenses, one for viewing (the top one), and one for actually taking the picture (the one below). The viewfinder flips up from the top and you look down into it to frame and focus the image, which appears back to front on a piece of ground glass. There is a little magnifying glass to assist with fine focussing. It’s a very simple system and it works well, but if you want to get it right, you have to take your time. Given the cost of film and the fact that you only get twelve shots per roll, you’ll want to take your time anyway. This is the last in a long line of made-in-Japan Yashica homages to the more famous German Rolleiflex.

There is a real sense of occasion when using this camera. It’s theatrical in a way that most cameras are not. Back in the days when owning a car was something special, people would make a decision to “take the car out” as a treat. Using the Yashica Mat feels just like that. Being fully manual–it has its own light meter, but it’s not coupled to any settings–you have to check the light and set the aperture and shutter speed to get the correct exposure. Like making good coffee, you have to go through a process, and do it mindfully and with care. Most digital cameras can be operated one-handed, an ergonomic development we can thank for the rise of the selfie, but for the Yashica Mat you need three hands. It’s best to have it hanging round your neck or on a tripod while you set it up. Yet for all this inconvenience and fiddling around, once you get the hang of it it’s surprisingly easy and pleasant to use. All the settings can be seen looking down at the top of the camera, which is what you’ll be doing anyway while you are framing the shot, and what you see in the viewfinder is pretty much what you see when the negatives come back from the lab.

I had a soft spot for these kinds of cameras even before I acquired this one. My Dad had a Yashica TLR in the 1970s (a 635 I think) and I have  happy childhood memories of him in holiday clothes, head bowed into the viewfinder while we smiled and tried not to blink at the wrong time. Since I started using one myself I’m even more taken with it. As an object it really looks the part, but it is also a functional and highly effective design, with a superb, sharp 80mm f/3.5 Yashinon lens. And when you use it it makes people smile.