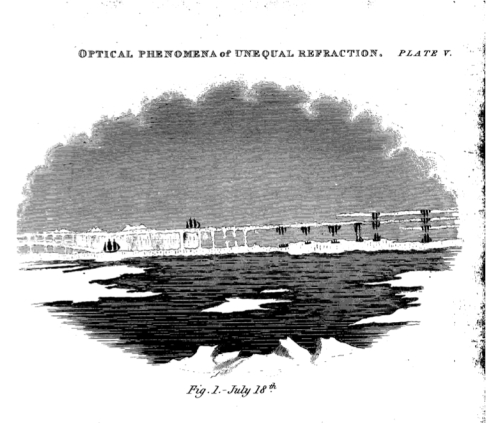 The ‘fishery’ was both a dangerous place, and an uncertain one. On Monday April 29th both the Hope, and the Vigilant struck whales, and in the afternoon, as the wind fell, the sea began to freeze. Scoresby, for whom the problem of accurately deteermining longitude became a longstanding obsession, set about taking measurements, taking advantage of the clear sky, and the visibility of sun and moon. While engaged in this activity, he also noted a strange optical illusion, illustrated above, in an image from his 1823 book, Journal of a Voyage to the Northern Whale Fishery, and also described in his Account of the Arctic Regions. In the 1811 journal he describes it thus:

The Air near the horizon though cloudless was so variable in Density that the Circumferencial boundary appeared hilly replete with [ringes? see Ian C. jackson, 2003] of [one third] or [half] a degree of Altitude[.] A ship also to the NEd appeared to be on her beam ends, but whether this was the Case or it was an optical deception I could not at this time determine[.] … The case of the ship last night proved to have been an optical deception for this morning she appeared in her natural position.

Crossposted from Letters to Elizabeth